Throughout the Kickstarter campaign, we will be adding brief interviews highlighting the talented authors who have contributed to the anthology. Today we have the excellent Stephen Herczeg.

I think from very early on I was drawn to crime stories, especially those with a deep detective element. I recall a “junior” detective series from primary school that led the reader to form their own solution before the main character revealed all, plus I grew up with the Peter Ustinov Poirot movies and was an avid Agatha Christie reader, I still have a decent collection on my shelves. My other loves have always been Mickey Spillane and James Bond, grittier than Holmes but each has a level of detection involved.

My first recollection of Sherlock Holmes would be from watching “The 7 percent solution” and “Murder by Decree”, very heavy dramatic movies that I watched in my early teen years but the essence of which has stayed with me all these years later.

When the call came out for an anthology with a “supernatural” bent, I decided then and there to write a Sherlock Holmes vs Zombies story. I’ve had a fascination with the zombie sub-genre for as long as I can remember. I’m a bit of an aficionado, having seen and rated well over 150 zombie movies. I’ve also written several zombie film scripts, two of which have done pretty well in international screenplay competitions. In my story, I managed to weave the Haitian zombie/voodoo theme into a detective mystery and I’m happy with the result. The ending is perfectly rational, with a little left open to the imagination.

My story “The Adventure of the Sugar Merchant” takes place in late 19th century London, in and around the docklands area with the climax on a country estate.

It begins as a simple dead body mystery but leads Holmes and Watson into the dark underbelly of Thameside London, then back to a businessman with nefarious dealings in Jamaica and Haiti. His crimes are avenged by supposed legions of the dead which almost costs Holmes and Watson their own lives.

These aren’t the ravenous undead of the “Living Dead” or “28 Days later” movies, these are the old-style voodoo zombies of “White Zombie” and “I walked with a zombie”. I hope I’ve painted a picture that lends a level of credibility to the zombies and leaves the reader with the idea that they could exist.

Which is your favourite story from The Canon and why?

My other love is horror. I’m an avid horror-phile and am lucky enough to have had dozens of horror stories published in parallel to my Sherlock Holmes stories. The natural favourite story is of course “The Hound of the Baskervilles.” A mystery presented as a supernatural story with a totally rational ending and one that piqued the imagination of the mainstream public and brought Holmes into the average person’s mind.

I lived in London for about three years in the early 00’s. Absolutely loved it and miss it dearly. We did a lot of night-time walking tours which included some of the seedier sides of the city, (i.e. the East end, etc) and you could clearly imagine yourself in 19th century fog-bound London. The city itself is such an incredible mix of old and new, from the wonderful Georgian and Victorian terraces through to the wide-open fields of Hyde and Regent’s park and even Hampstead Heath, nestled in amongst the towering blocks of Canary Wharf.

Even now I just love it when I need to research a new Holmes tale. Google Maps (and street view) feature prominently in my investigations bringing up memories of my own trips to many of the places.

I’ve promised my kids that I will take them to London and just need to pull my finger out and do it. Though me may not return home this time.

I’m a Third Degree Black-belt in Taekwondo. I started training over fifteen years ago and am currently working towards my fourth degree, though my old body is a little more susceptible to injuries these days, so it’s been a hard slog.

My father was the first Adelaide based soccer player to represent Australia. He was picked up for the 1966 world cup campaign, but we went down to South Korea. I’ve never had his talent, but I’ve played for years and am currently coaching my daughter’s Under 14 girls’ team.

I played the “Burnt Guy”, one of the main zombies in an independent zombie film called “Theatre of the Dead” filmed right here in Canberra, Australia. I was brought in early on, mostly cause I knew the Director and he knew my knowledge of zombies, and became the face of the film with a promotional shoot done in full makeup to help with the Kickstarter campaign and early advertising to raise funds. I was brought back to act in the film over a period of three days (two and a half hours in the makeup chair each time).

Apart from a few Sherlock Holmes stories that I’m waiting to hear back on, I have, at last count, stories featuring in around fifteen magazines and anthologies waiting to be published, plus another ten or so stories sitting on various “to read” piles.

My personal “Submissions List” has another ten projects on it that takes me up to early next year, plus I’ve had the need brewing in my mind to produce a novel. It’s there simmering in the back of my head, I’ve plotted it out, I have written the short story it will be based on, so it’s just about making the time and sticking with it.

The biggest problem is that life keeps getting in the way of my writing. 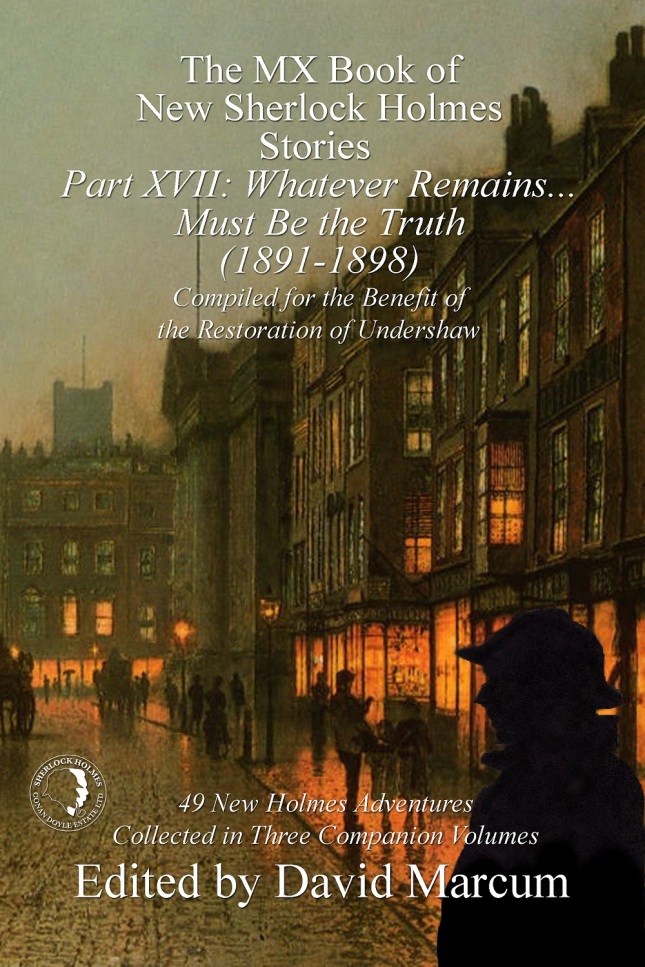