“Did Dr. Watson’s published accounts of Holmes’s cases affect future investigations? Has the Ripper returned to slaughter prostitutes in Whitechapel years after his Autumn of Terror ended? Was a stolen manuscript about Sir Lancelot and King Arthur actually a lost Shakespeare play? Those are just three of the striking plot lines in this standout anthology of 21 short stories written in the spirit of Conan Doyle’s originals. Marcum’s own “The Carroun Document,” perhaps the first among equals, supposes that Holmes’s popularity as a result of the publication of his adventures in the Strand Magazine has resulted in unsought-for celebrity, complete with souvenir hunters visiting Baker Street. “The Threadneedle Street Murder” by S. Subramanian not only features a locked-room puzzle but an amusing tweak of Conan Doyle’s penchant for teases about untold cases. For example, Holmes is interrupted before he can recount the details of a mystery involving a husband who smeared his wife’s face with egg yolk every night before singing “God Save the Queen.” More than 300 pastiches later, this MX series shows no sign of running out of steam.” – Publishers Weekly

“This outstanding anthology focuses on the early years of the Baker Street duo’s partnership. Sherlockians with a soft spot for Nigel Bruce’s buffoonish portrayal of Dr. Watson will appreciate S.F. Bennett’s homage to the Basil Rathbone movie series, “The Case of the Enthusiastic Amateur,” one of the volume’s many high points. In Bennett’s tale, an old acquaintance asks Watson for help when he suspects that an investment failed because of fraud; the doctor decides to undertake the inquiry himself, with hilarious consequences. The author successfully emulates the playful byplay between Watson and Holmes in the service of a clever mystery plot. Almost as good is Tracy Revels’s “The Adventure of the Winterhall Monster,” a variation on the legend of the Monster of Glamis, in which a nurse who once worked with Watson is alarmed by the bizarre circumstances of her new job caring for an infirm child. Amazingly, Marcum has found 22 superb pastiches, almost all from unknown authors. This is more catnip for fans of stories faithful to Conan Doyle’s originals.” – Publishers Weekly

“Smith’s facility at crafting original plots remains undiminished in this collection of six Sherlock Holmes pastiches. Some hook the reader with a tantalizing opening, such as “The Jet Broach,” in which the Baker Street detective receives an anonymous package containing a brooch and a scrawled note for help. Even those with a less dramatic start take unexpected and intriguing turns, such as “The Five Keys,” which begins with a request for help so banal that Watson is surprised his friend accepts the case—a couple want the detective to attend the reading of a will, to keep his eyes and ears open for anything underhanded. Holmes gets drawn into a mystery worthy of his skills that ends with an eminently fair solution. “The Inn on the Marsh” features an odder entreaty from another man and wife, who are perplexed as to why the guest register at the inn they stayed at during their honeymoon no longer contains their names. Sherlockians will rejoice that Smith continues to create new mysteries faithful to Conan Doyle.”

The Further Chronicles of Sherlock Holmes: Vol. 1 is available for pre order from all good bookstores including The Strand Magazine, Amazon USA, Barnes and Noble USA, Amazon UK and for free shipping worldwide Book Depository.

“Marcum continues to impress with the quality of his selections, many from little-known authors, in his seventh anthology of traditional pastiches (after The MX Book of New Sherlock Holmes Stories, Part VI: 2017 Annual). The 23 entries all contribute to this volume’s goal, as Marcum states in his introduction, of assembling “what seemed to be supernatural tales, but with real-world endings.” Consistent with Conan Doyle’s depiction of his hero as a hard-headed rationalist, these stories pit Holmes against ghosts, vampires, and fairies. Apart from the clever solutions to puzzles involving a seemingly haunted clock (Gayle Lange Puhl’s “The Case of the Cursed Clock”) and spirit photographs (James Moffett’s “The Blank Photograph”), contributors have not hesitated to deepen the depictions of Holmes and Watson. Some entries focus on minor characters and relatively trivial concerns. For example, Mike Hogan is open to the idea that not all of Mrs. Hudson’s cuisine was appealing in “The Tranquility of the Morning.” The standout, Thomas A. Turley’s “A Ghost from Christmas Past,” offers moving insights into Watson’s tragic family life. Sherlockians eager for faithful-to-the-canon plots and characters will be delighted.”

“The traditional pastiche is alive and well, as shown by the 35 Sherlock Holmes stories in Marcum’s excellent sixth all-original anthology (after 2016’s The MX Book of New Sherlock Holmes Stories: Part V—Christmas Adventures). This volume showcases talented, lesser-known authors who offer a wide variety of mysteries for Holmes to solve, including a classic locked-room murder (David Friend’s “The Adventure of the Apologetic Assassin”) and a genuine rarity, a whydunit in which the killer’s identity is never in question but his motive is (Jennifer Copping’s “The Adventure of the Vanishing Apprentice”). David Timson’s “The Adventure of the Wonderful Toy” makes especially creative use of Thomas Edison’s invention of the phonograph, which is used as a tool for extortion. Many entries manage to craft baffling mysteries that don’t involve crimes of violence, and others offer ingenious extrapolations from Watson’s cryptic references to untold cases, such as Hugh Ashton’s “The Adventure of the Returned Captain,” a take on “the loss of the British barque Sophy Anderson.” This is a must-have for all Sherlockians.”

The MX Book of New Sherlock Holmes Stories – Part VI: 2017 Annual is available from all good bookstores including in the USA The Strand Magazine, Amazon, Barnes and Noble, in the UK Amazon, Waterstones, and for free shipping worldwide Book Depository. In ebook format it is in Kindle, Kobo, Nook and Apple iBooks (iPad/iPhone). 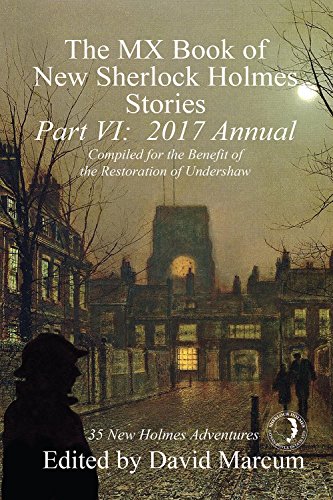