“Kim Krisco has captured Sir Arthur Conan Doyle’s style in his novels about the enigmatic Sherlock Holmes. Rarely does a figure continue to live past the original writer’s time, but Krisco has managed a way to keep Holmes alive — much to the delight of this fan. In The Celtic Phoenix, Krisco treats us to an in-depth look into the lives of the ancient Celts and their intriguing ways, while at the same time entwining Holmes and Watson into the thick of things. An excellent read — an excellent author.”

The Celtic Phoenix: A Sherlock Holmes Adventure is available from all good bookstores including The Strand Magazine, Amazon USA, Barnes and Noble USA, Amazon UK, Waterstones UK and for free shipping worldwide Book Depository. In ebook format it is in Kindle, Kobo, Nook and Apple iBooks (iPad/iPhone). Available on Audio. 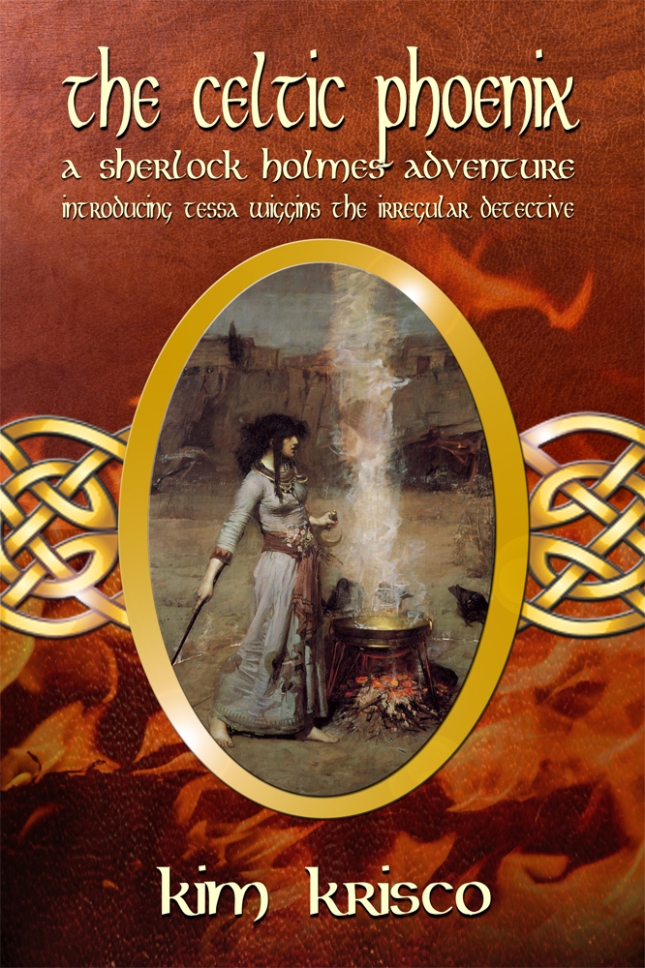 Review of The Celtic Phoenix: A Sherlock Holmes Adventure

“It’s 1919 and Sherlock Holmes has retired to a South Coast cottage where he is using his past cases to compile a definitive work on crime and criminals. This is interrupted by the arrival in the post of a decorated jewellery case/casket inside which are a pair of testes. Is this a warning or perhaps a challenge, maybe from a murderer?

Back in London, at Scotland Yard, there is an investigation following a murder that has links to Holmes’ unusual package. An acquaintance of Dr Watson’s has been killed, his suspected murdered a young woman with a sad past. It’s claimed that the young worker, under the care of the Salvation Army, killed her master. The victim, like Holmes, had received something in the post that disturbed him.

The symbols on the casket (of testes) are Celtic in origin. The Celtics lived thousands of years ago, with a sacred and respectful view of nature, and equality between the sexes. Women, the birth-givers/creators of life, often took on leading and important roles, such as priests and warriors. Given the contents of the casket sent to Holmes, was this sent by a woman with a Celtic link?

One legendary cult of women warriors, the Sisters of Scathach, are making a return, and it could be timely. With slavery, sexual abuse, violence and discrimination rife, there’s plenty for such a group to fight against. But is this a welcome social justice campaign or criminal plan for revenge for modern crimes against women?

A former Baker Street irregular, Tessa Wiggins, teams up with Holmes – and to some extent Inspector Walls – as they attempt to prevent more killings and restore order, whilst serving justice. There are several strong female characters in a book which explores feminist issues that are as relevant today as they were 100 years ago.

There are hidden items, secret codes and historic lore, making for an interesting adventure. A well told story from a writer comfortable with the Holmes canon.”

The Celtic Phoenix: A Sherlock Holmes Adventure is available from all good bookstores including The Strand Magazine, Amazon USA, Barnes and Noble USA, Amazon UK, Waterstones UK and for free shipping worldwide Book Depository. In ebook format it is in Kindle. Available on Audio.

An enigmatic jewelry case, holding human remains, arrives at the cottage of Sherlock Holmes, enticing him from his retirement refuge in the Sussex Downs. Holmes sets out on the trail of the murderer taunting him, joining forces with one of his former Baker Street irregulars, Tessa Wiggins. The two find themselves battling forces arising from a time before England was a country – when the Celts were fighting for survival.

Though set in 1919, The Celtic Phoenix is steeped in the enigmatic culture of the ancient Celts who reigned over much of Europe 3,000 years ago. It was a time when the bond with Nature was strong…when people walked in the olde ways…and when women were the equals to men as warriors, priests, and poets. The Celtic Phoenix is the journey of three women who rise from the ashes of their past like fearsome phoenixes and shake the rational foundations upon Sherlock Holmes built his life and career.

162 books on the Sherlock Holmes Audio Books Pinterest Board

The Celtic Phoenix: A Sherlock Holmes Adventure is available from all good bookstores including The Strand Magazine, Amazon USA, Barnes and Noble USA, Amazon UK, Waterstones UK and for free shipping worldwide Book Depository. In ebook format it is in Kindle.

“This has been most fascinating! I believe this book fills a place that has too long been missing from the world of Sherlock Holmes. The Baker Street Irregulars feature in many of the canonical stories, yet other than Wiggins we seldom know their names. Even with Wiggins mentioned, his life outside of being one of Holmes eyes and ears is a total blank.

I loved the book although I really felt the ending was so sad! I give the book five stars! I would love to see this point explored even further! Good show, Kim Krisco! Bravo and encore!”

Irregular Lives is available from all good bookstores including The Strand Magazine, Amazon USA, Amazon UK, Waterstones UK and for free shipping worldwide Book Depository. In ebook format it is in Kindle, Kobo and Apple iBooks (iPad/iPhone).

Posted by mxpublishing on May 24, 2017 in Book Reviews, Sherlock Holmes and Arthur Conan Doyle, Uncategorized