James Macaluso has two passions – Sherlock Holmes and Lego – and he has brought them together to create the series of books ‘Sherlock Holmes Re-Imagined’ which have proved a hit with fans all over the world:

“The illustrations by P James Macaluso Jr are eccentric, clever, beautifully presented, witty, and bang up to date, being full-colour photographs of creations in Lego, each a scene depicted by Sidney Paget in The Strand Magazine. Ideal presents for the young Holmesian in your life.” Sherlock Holmes Society of London

In this volume, Sherlock Holmes’s most famous case, The Hound of the Baskervilles, is retold in just twenty-six words, wherein the first word begins with A, the last with Z, and the story proceeds as the alphabet progresses. The text is accompanied by amusing photographic illustrations of custom designed LEGO® models and minifigures. This uniquely illustrated edition is sure to delight LEGO® enthusiasts, as well as fans of the Great Detective, children and adults alike.

A Baskerville Curse – The Models

James is making available a limited number of the actual models used for the book as rewards – they are totally unique and a very special gift.

LEGO® is a trademark of the LEGO Group of Companies. The LEGO Group has not been involved in nor has it in any way licensed or authorised the publication of this book. 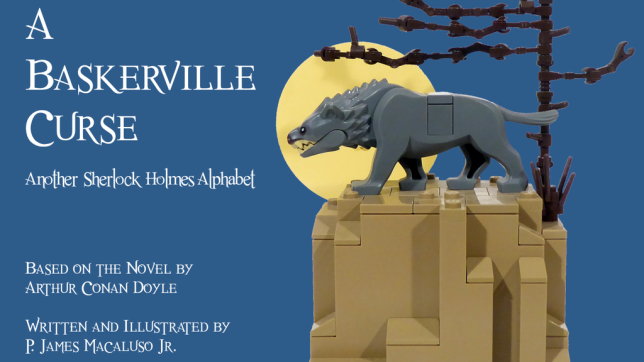 Posted by mxpublishing on October 16, 2019 in Sherlock Holmes and Arthur Conan Doyle, Uncategorized