Throughout the Kickstarter campaign, we will be adding brief interviews highlighting the talented authors who have contributed to the anthology. Today we have the excellent Roger Riccard.

First introduced to Sherlock Holmes via the Book of the Month Club as a teenager in the late ‘60’s.

After watching the outstanding Sherlock Holmes Granada TV series with Jeremy Brettt and Edward Hardwicke, I felt I now had a real handle on the characters, especially since Watson was no longer portrayed as the buffoon of the Nigel Bruce era.

Having completed two novels, I was looking for inspiration and decided to use a short story I had written for the Sherlockian E-Times and build upon it, thus creating Sherlock Holmes Adventures for the 12 Days of Christmas. This collection of twelve short stories inspired my current project;

A Sherlock Holmes Alphabet of Cases. Volume Three (K-O) is due out this Fall. This has tales ranging from 1881 to 1900 and involves international intrigue (The Kaiser Role and The Origami Mystery); secret messages (The Trinity Leprechaun and the Origami Mystery); the original ‘domestic complication’ of Mrs. Cecil Forrester (The Monique Mystery) and a visiting American with a mystery of his own (The Notable Musician).

My goal in all the stories is to have the reader see things through Watson’s eyes and to build upon the Watson-Holmes relationship. As smart as Holmes is, he needs Watson’s temperament and ability to be ‘a conductor of light” to help him function socially within a society that is far below his intellectual capacity.

Which is your favourite story from The Canon and why?

My favorite canonical story is the Adventure of the Abbey Grange. In addition to brilliant deductions, Holmes sympathizes with the real culprit and walks that fine line wherein he gives Inspector Hopkins the necessary clues, but refuses to solve the case for him, He shows compassion for the wronged woman and her saviour and gives Watson the highest of compliments when he appoints him as the representative of a British jury.

My favorite Holmes-related place is 221B Baker Street. It is there where most adventures begin and often end. It is where we see the best interactions between Holmes and Watson, as well as Mrs. Hudson in her mother-hen role. The indexes, the chemical table, the Persian slipper, the jackknife pinned to the correspondence and the ever-present pipe, filling the room with a blue haze as the detective runs his observations and deductions through his mind, these are the things that help define Holmes.

As to myself and things people may not guess: I am a baseball aficionado, having played in college and trying out for the California Angels. I also enjoy old movies from the 30’s and 40’s, mostly comedies with Cary Grant, Katharine Hepburn, and Fred Astaire and Ginger Rogers, in addition to John Wayne westerns. I also am a big fan of both movie and Broadway musicals brought to film in the Golden Age of the 50’s and 60’s. Finally, my wife, Rosilyn, led me into singing with a group that entertains seniors in retirement homes. Often with tunes from those same Broadway shows.

As far as upcoming projects: A Sherlock Holmes Alphabet of Cases. Volume Three (K-O) is due out this Fall. Volume Four of the Alphabet of Cases is due out in 2020 and the finale, Volume Five, the year after that. I also have what I hope will be a unique volume written from Holmes perspective in my long-range plans.

One book I’m especially proud to plug, in addition to my current work, is the E-reader version of Sherlock Holmes Twelve Days of Christmas, as it contains the whole set, rather than the paperback version which came out in two volumes. (Personal note: My favorite story is The Three French Henchmen) 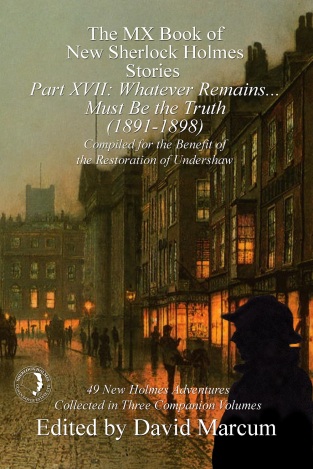