RSS
← Out today – The Detective, the Woman and the Pirate’s Bounty
The Adventures of Swearlot Holmes →

Review of Rendezvous at the Populaire

“ A tough assignment for an art student would be to paint a cohesive painting by mixing the styles of two different artists. An example would be using both the style of Rubens and Picasso, or maybe Rembrandt and Van Gogh. Difficult, yes?

That is sort of what Kate Workman has accomplished with this stunning tale that mixes the world of Sir Arthur Conan Doyle and the world of Gaston Leroux. The world’s greatest detective meets the mad genius of Erik, the Phantom of the Opera.

Holmes has reached a low point in his life. Having been seriously wounded in his right leg, Holmes has been told by Watson that he will need a cane for the rest of his life. Holmes is despondent and worries that he needs to retire.

Then a letter arrives from Paris. The new owners of the Paris Opera House, The Opera Populaire, are asking for aid. The Opera House is being held hostage by a phantom who demands monthly payments, a prime seat in the boxes, and occasionally suggests who should sing which role.

Having taken singer Christine Daae under his wing for private lessons, the Phantom wants her to be the star. When his demands are not met, he sends the heavy chandelier crashing into the stage and orchestra pit. He also hangs a man from the catwalks, scaring the entire opera.

Holmes learns that the Phantom has always been at the Opera House and that the former owner had no trouble, for he paid the Phantom’s monthly stipend and did not rent box five. The new owners are determined to defy the Phantom, even though they can afford to pay the stipend.

Join the battle of wits as Holmes beards the Phantom in his own lair beneath the Opera. Genius recognizes genius, and the two have more in common than either realizes at first. Like our art student, Kate Workman deftly wields both brushes, staying true to the Holmes tales and true to the Phantom, but making her masterpiece stand on its own. The twist ending is like the final flourish of brush on canvas, when the artist signs his work.

This novel is worth plus five out of five stars for the originality of the Holmes/Phantom blend! Encore!”

Rendezvous at the Populaire is available from all good bookstores including The Strand Magazine, Amazon USA, Barnes and Noble, Amazon UK and Waterstones UK. For elsewhere Book Depository who offer free delivery worldwide. In ebook format there is Amazon Kindle, Kobo, Nook and iBooks (iPad and iPhone). Available on Audio. 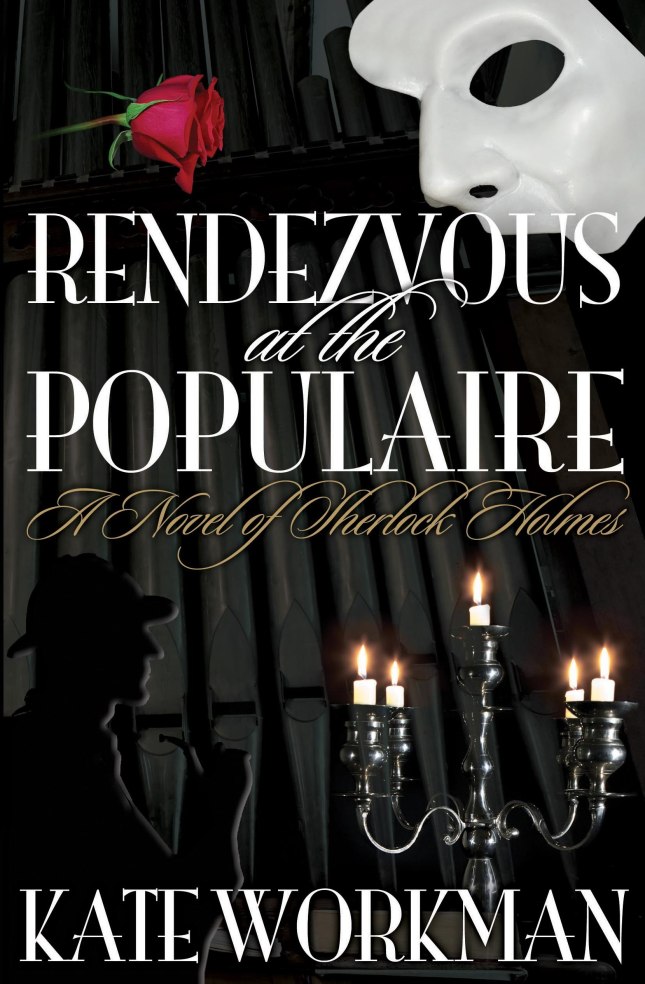 ← Out today – The Detective, the Woman and the Pirate’s Bounty
The Adventures of Swearlot Holmes →