First published in 1908, Wheels of Anarchy – The Story of An Assassin was written by Max Pemberton, a friend of Arthur Conan Doyle, from notes of another friend Bertram Fletcher Robinson. Fans of James Bond should take a look at this fascinating novel which makes Bond seem a little tame. Considering it was written at the turn of the last century, the subject of international terrorism is surprisingly modern. A recent review of the reprint is published in this month’s District Messenger.

“Robinson or Pemberton may have discussed the story with their friend Conan Doyle, but the narrator, Bruce Ingersoll, is no Sherlock Holmes. Like the heroes of those other unputdownable Edwardian thrillers The Riddle of the Sands and The Thirty-Nine Steps, he’s an ordinary, decent, educated man with an adventurous streak. The peril he faces is extraordinary and strikingly modern – international terrorism. It’s a gripping tale, grippingly told” Sherlock Holmes Society of London.

The book is available from Amazon USA, Amazon UK and all good bookstores. 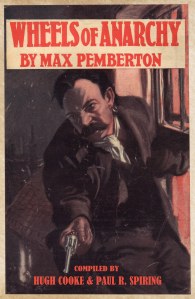