The answer is 25th December if you are online – 24th if you are a physical shop. That’s not a typo, if you are a bookseller or publisher then the online appetite from consumers won’t stop when the tills in the shops close on Christmas Eve. Shopping on Christmas Day is a relatively new phenomenon. In 2008 as in years before, shopping online started to slow down around the 16th December and stopped almost altogether on the 19th.

In 2009 we passed a significant point in our shopping cultural evolution. Some time during 2009 shopping online became a daily activity and we saw purchases continue throughout the last week before the holidays and on Christmas Day itself UK consumers spent an unprecedented £120m+ online.  Read more

Posted by mxpublishing on December 22, 2010 in Publishing

There is now no barrier for small independent fashion retailers to have an eCommerce store. Take a moment to visit small independent Selendari’s Secrects new website, have a look at the stunning multiple images on their dresses and have a guess at what the site costs them a month to maintain.

Under £50. That’s not a typo, the site has been created using the open design toolkit available free to web designers on the Venda eCommerce platform and the ongoing license for the site is £49.99 including VAT. As the toolkit is freely available to designers who join the Venda developer community there are now hundreds of agencies that will produce you a lovely customised design for a fraction of what a bespoke site would cost.

What’s so different about the model that enables this? Firstly there is a clear separation of roles between the platform provider, in this case Venda, and the designer. Venda’s job is to host, support, keep secure, etc the underlying platform and keep enhancing it (they release new functionality to retailers every 6-8 weeks). The designer is then left to purely work on the CSS (Cascading Style Sheets) using a simple to use Firefox Plug-in toolkit. The content management system on Venda has been designed to empower the shop owner to run the store themselves – zero technical skill required – so that the web designer doesn’t get any support calls around how to use the system. There is full support including live-chat for the retailers too so designers have found that they can concentrate on what they do best, design.

Lucy Whittington from one of the design companies using Venda comments:

“Ecommerce and online selling can be hard to get right — you need have a robust, well tested, and well designed ‘engine’ managing your web shop. You need to be able to easily manage stock, your catalogue, pricing, new products, offers, brands, the buying process — in fact all aspects of online sales. Venda SBS does all this, so we don’t have to worry about it. What we can then concentrate on is making an online store ‘look good’ and work well for sales.

We offer a creative service that sits on top of Venda — and can make your Venda site bespoke in terms of design. We can also assist with catalogue uploads, ongoing maintenance, and all associated marketing (online and offline) as required”

So the cost barrier has been removed, what about generating sales? Well, the savvy designers building on the platform are also providing value added services like blogs (see the Ibson Men’s Blog which links back to their site), Twitter accounts, email marketing and more. These services not only drive sales for the retailers but keep the relationship between designer and retailer going – all the while the new functionality on Venda handles the eCommerce basics like keyword intelligent page addresses (URLs), strong integration into Google Shopping, promotion codes, discounts etc.

With a full integration into Google Analytics out of the box the designers are armed with performance information for the sites so can recommend new tactics and changes to the retailers. Adding images, changing texts, updating featured products and promotions can all be done by the retailer themselves which is vital as it means that money spent with the designers is not on admin, but on value add.

Our own publishing business has been transformed since we added a designed Venda site. eCommerce sales are up, both in the UK and USA and critically for us new author enquiries as our site looks fresh and professional. 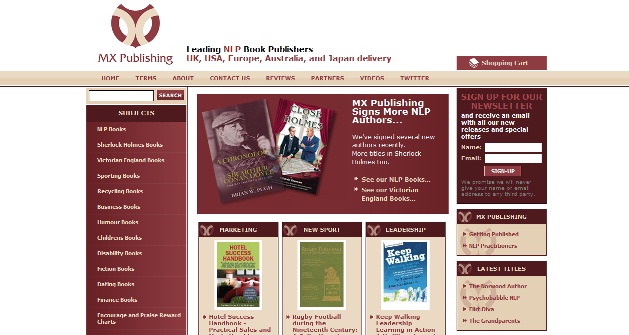 Designers who want to join the growing developer community on Venda can email them at support@venda-sbs.com.

Posted by mxpublishing on March 12, 2010 in Independent Retail

On Christmas day in 2009 a staggering £138 million pounds was spent by UK shoppers [Internet Retailling] with online retail stores and while the high street saw a tough January, online continued to flourish. Online shopping represents around 5% of UK retail sales, but in the peak period it goes much higher and recent research from Kelkoo predicted that online sales will bypass high street sales at Christmas 2015 – just five years time.

So who are the winners? Well, unsurprisingly it is the large retailers that are making the most of the online growth. Amazing figures from one eCommerce provider just released showed that retailers on their platform grew their online sales on average 84% year on year for the critical 4th quarter (2008 to 2009). So it is possible to adapt retail to the post broadband world.

But what does the smaller retailer do? Recent coverage across the UK media with headlines such as the Guardian ‘Ghost town threat as UK shops fall empty‘ paint a grim picture with claims that in some areas around 25% of independent retailers have closed down in the last 2 years. The fundamental issue is that there are huge myths out there that trading online is;

c) out of reach of the small independent

Five years ago, yes to all three. Back then (pre-broadband) the eCommerce platforms were complex, difficult to set up and more importantly difficult to run. If you wanted to make changes you had to go back to your service provider who would charge you hundreds of pounds to change text or images.

2010 is a very different time. Broadband has arrived and customers’ demands from their online stores have accelerated and the eCommerce industry has responded. One of the heavyweights unveiled a new platform in January that looks like the first that truly brings eCommerce to the masses – with zero technical skill required. Don’t believe the hype? This week they released an incredible video showing the building of a clothing store from zero to trading in under 10 minutes – conveniently enabling it to be loaded onto YouTube.

The big differences with these new platforms from previous attempts to bring eCommerce to independents are that in addition to the ease of use there are some interesting elements of this new breed that are brought straight from the big retailer world:

a) the platforms are fully hosted and can be accessed from any internet connection. Previous attempts at opening up to the masses using open-source have the fundamental challenge of having to get the shops set up and hosted securely.

b) they are software as a service, and as such upgraded centrally on a regular basis – all stores get upgraded to the latest version at the same time as part of the monthly license

Enterprising regional governments have been quick to utilise this new technology. The Shop Isle of Man program aims to get 100 retailers up and running online and within a few months of launch has over 30 stores up and running delivering lots of footfall and interestingly quite a lot of export sales for the independents involved.

There are plenty of support organisations out there as well helping special interest groups like homeworkers for instance – Enterprise Nation champions the cause of homeworkers including those running businesses 5-9 alongside their day jobs.

So its’ easy for small independents to trade online then? If they know these myths have been blown away then yes, but the reality in the UK so far is actually sadly no. All the technical and cost barriers have been removed but a critical barrier remains. The way we go about communicating to and about our retailers.

Tens of thousands of column inches in recent weeks have been handed over to the doom and gloom of ‘ghost towns and streets’ but how many news reports and articles have you seen showcasing those independents that are changing and adapting to the new world and expanding their business? Less than 1% is the answer.

Five years ago we had a clunky and difficult to use website that cost us a small fortune to maintain – now we can update our online store in minutes ourselves and receive orders from all over the world including the USA, Japan and Australia – and it costs us under £50 a month to maintain. eCommerce for the masses is here, we just need to let the masses know.

Posted by mxpublishing on February 20, 2010 in Independent Retail, Publishing