“Steampunk Holmes: Legacy of the Nautilus by P C Martin. I suppose the combination of Sherlock Holmes and Steampunk was inevitable. Guy Ritchie’s first Holmes film had elements of Victorian super science, but the true hybrid flowering is in Steampunk Holmes. Full details are at www.steampunkholmes.com, but for the less elaborately electronically enabled, such as me, the first adventure is now available in its most accessible form: i.e. a book. Steampunk Holmes: Legacy of the Nautilus places Sherlock Holmes and Dr Watson in a world where electricity has yet to be developed, the internal combustion engine is irrelevant, and steam power has been developed to the highest degree. Holmes’s favoured transport is a powerful motorcycle. Watson sports a mechanical right arm. And Mycroft Holmes is Sherlock’s beautiful, devastatingly intelligent sister. The story, as you’d expect, involves Captain Nemo and his famous submarine, cleverly working them into a reimagining of ‘The Bruce-Partington Plans’. With character portraits by Daniel Cortes and a superb cover by John Coulthart, it’s very stylish – though for the best of Mr Cortes’s illustrations you’ll need to check the website. “

Steampunk Holmes: Legacy of The Nautilus  is available from all good bookstores including in the USA Barnes and Noble, Amazon and in the UK Amazon and Waterstones. For elsewhere Book Depository offer free delivery worldwide. Also available on Kindle. 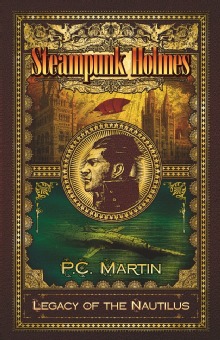