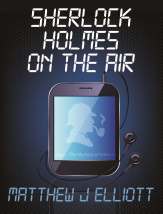 “one of the most prolific and intelligent writers in the field”

In the current edition of the Sherlock Holmes Society of London newsletter appears the review of Matthew Elliot’s collection of radio play on Sherlock Holmes.

M J Elliott contributed his first script in 2003 and is now one of the most prolific and intelligent writers in the field. If you’ve ever listened to a radio play and asked yourself, ‘How did they do that?’ – or even, ‘Why did they do that?’ – you’ll love Sherlock Holmes on the Air (MX Publishing; £14.99/ $22.95/ €16.99), a satisfyingly chunky volume containing eight of Matthew Elliott’s best scripts for The Further Adventures plus ‘A Study in Scarlet’ and ‘The Empty House’ from The Classic Adventures of Sherlock Holmes, the parallel series of dramatisations from the Canon, which has been Mr Elliott’s sole domain since he began it in 2005.”

Sherlock Holmes On The Air is available from all good bookstores including Waterstones UK, Amazon UK, Amazon USA, and Barnes and Noble USA.