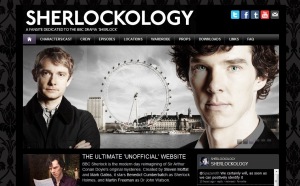 Last week the world’s largest unofficial fan site for BBC’s Sherlock, Sherlockology, went live, with tens of thousands of visitors in the first 24 hours. A quick look through the site and you can see why. They have a huge amount of information about the BBC series, which enlisted an immediate response from the show’s producers within hours of the site going live.

In term’s of The Great Sherlock Holmes Debate the timing couldn’t have been better as now the team behind Sherlockology have thrown their considerably large hat in the ring and joined the BBC team. This is important for the BBC as last week we announced that I Hear of Sherlock Everywhere joined the Guy Ritchie team with their access to some of the film’s advisers.

One of the Sherlockology team commented about the debate as they joined:

“The timing is excellent with ‘Sherlock Holmes: A Game of Shadows’ coming out in December, and the second series of BBC ‘Sherlock’ broadcasting in early 2012 – with the first episode having a press preview in early December.”

The first statement of intent came out at the weekend from award winning writer Alistair Duncan who drew the battle lines on two key issues – Fidelity (how true to the original the adaptations are) and New Fans and profile. On his Sherlockian Blog Alistair argues that the debate will be a very close run thing. Alistair is one of the world’s leading experts on Holmes and Conan Doyle. This year his book, The Norwood Author picked up the coveted 2011 Howlett Literary award (Sherlock Holmes Book of the Year). He knows his BBC Sherlock too. When the BBC contacted the London Society to suggest an expert to comment on the new adaptation, on the morning of the airing of the first episode it was Duncan that was interviewed on BBC 5 live.

What is important for the BBC team is that Sherlockology bring a depth of knowledge to the debate that is unsurpassed. From cast to wardrobe, scripts to locations, the site covers every possible aspect of the series and will help the team with the specifics. It will be interesting to see how the Films team responds this week.

Please remember the debate is supporting two important causes – Save Undershaw and BAFTA for Jeremy Brett – please check out their sites and join their pages on Facebook (Undershaw Trust on Facebook).

One response to “World’s No.1 Fan site for BBC Sherlock joins the Great Sherlock Holmes Debate”