RSS
← Book Review – The Official Papers into the Matter Known as ‘The Hound of the Baskervilles’ – Sherlock Holmes Society of London
What Is The Most Loved NLP Book In The World? It’s The Most Hated One. Should it be renamed the Marmite Guide to NLP? →

A World Without Sherlock Holmes? – That Would Be The Reality Without Bertram Fletcher Robinson

In 2011 we finally have the irrefutable evidence behind the success of the Sherlock Holmes character and it was unveiled by Devon author and Holmes investigator, Paul R Spiring. In a local newspaper articles from the Herald Express and Western Morning News and in a BBC Wales radio interview Paul revealed how he came across the letters that prove that Arthur Conan Doyle had more than a little help with the key story that launched Holmes worldwide.

Winding the clock back to the early 20th century and Arthur Conan Doyle had killed Holmes off and while the character had achieved some limited success, this was largely restricted to the UK. A lifelong friend of Conan Doyle’s was a young man, himself an accomplished writer, called Bertram Fletcher Robinson. Not much was known about Robinson, other than that he had died tragically young, before the acclaimed biography published in 2008 called simply ‘Betram Fletcher Robinson – A Footnote To The Hound Of The Baskervilles‘ written and compiled by Spiring and Brian W Pugh.

In the biography Spiring and Pugh talk about the great friendship between Robinson and Conan Doyle and how they had ‘collaborated’ on ‘The H0und’ and that Robinson was often referred to as the ‘assistant plot producer’ for the book. The biography talks about a very talented writer who also collaborated with such big names as PG Wodehouse – you can read their main works in the 2009 book ‘Bobbles and Plum‘, and Max Pemberton on ‘Wheels of Anarchy‘ , but it was his friendship with Conan Doyle that is of the greatest interest.

Without a doubt if it wasn’t for ‘The Hound‘ there would be no Sherlock Holmes today. No movies, no BBC TV series, no legions of fans around the world. It was the story that turned Holmes into the worldwide phenomenon that has led to millions of fans, many films, hundreds of books and and ongoing legacy for Conan Doyle.

So what has Spiring uncovered? Quite simply the written proof that Conan Doyle paid his friend the modern day equivalent of £45,000 [£500 at the time] for his help on the story. Conan Doyle was due to receive an estimated £1/2m in modern day values for the story so the payment to Robinson was about 10% of what Conan Doyle was to get. This proves, beyond reasonable doubt, that Robinson made a significant contribution to the storyline. It is well documented that Conan Doyle lent on friends and particularly family for ideas and indeed characters for his storylines but for him to go as far as handing over such a huge sum of money for the input is significant.

What a shame it is that Robinson was taken from us at such a young age, dying shortly after from poisoning [in his biography Spring and Pugh go into the accusations that Conan Doyle was the one that poisoned him]. He was a very talented writer of similar storylines to Conan Doyle as well as the playlets he wrote with Wodehouse. You can read twenty of his stories in ‘Aside Arthur Conan Doyle‘ which was also compiled by Spiring.

So in summary, all Holmes fans need to give a big thanks to Bertram Fletcher Robinson, without whom they would not have their wonderful character – and personally a big thankyou to Paul Spiring for proving it once and for all. 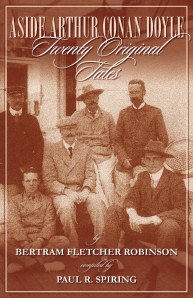 Posted by mxpublishing on January 8, 2011 in Sherlock Holmes and Arthur Conan Doyle

← Book Review – The Official Papers into the Matter Known as ‘The Hound of the Baskervilles’ – Sherlock Holmes Society of London
What Is The Most Loved NLP Book In The World? It’s The Most Hated One. Should it be renamed the Marmite Guide to NLP? →