‘The Sign of Fear’ is the first in a series of Holmes pastiche novels from Molly Carr, a life long Dr. Watson expert. It features Mrs. Watson as a strong female lead character andthe book has gained very posititive reviews from Holme societies around the world. Here, Roger Johnson from the Sherlock Holmes Society of London reviews the book for their newsletter;

“Never mind what you’ve been told: the former Mary Morstan is a woman with a past — so perhaps it’s natural that she should come within the orbit of the Napoleon of Crime. At least we can understand that she should occupy the time during Dr Watson’s long absences by doing detective work herself. More surprising is the identity of her partner, a dangerous young woman to whom male costume is nothing new: “Emily Fanshaw” is actually Mrs Neville St Clair, and she still resents the fact that Sherlock Holmes cut short her husband’s profitable scam by exposing him as the beggar with the twisted lip…

There are more surprises in Mary Watson’s memoirs, not least the revelation that John H Watson, who never qualified as a doctor, was born Ormond Sacker and changed his name by deed poll! Other dubious characters encountered by the intrepid duo include A J Raffles, Bunny Manders, John Clay, Mrs Marple (mother of Jane), and M. Poirot (father of Hercule). Rather like M J Trow’s stories of Inspector Lestrade, the book takes a distinctly revisionist approach to the Canon. The Sign of Fear is something of a guilty pleasure, perhaps, but a pleasure it certainly is!”

The Sign of Fear is available from all good bookstores including Amazon USA, Barnes and Noble USA,  Amazon UK, Amazon Kindle USA, Book Depository (free delivery to Canada and India), and for the iPad and iPhone through iTunes iBooks.

The sequel to The Sign of Fear, ‘A Study In Crimson‘ was release in November 2010. 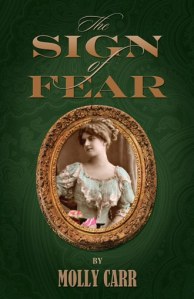 Posted by mxpublishing on December 31, 2010 in Book Reviews