RSS
← Philip K. Jones reviews The Final Page of Baker Street
Review of Sherlock Holmes and the Horror of Frankenstein →

“The Hound of the Baskervilles, adapted and illustrated by Petr Kopl (MX Publishing; www.mxpublishing.co.uk; 12 December) is clever, funny, beautiful and brilliant. It’s the first in Mr Kopl’s Victoria Regina series (A Scandal in Bohemia is the fourth). Don’t be surprised to find the narrative intersecting with the events of Dracula, The Lost World, Dr Jekyll and Mr Hyde and even Rossum’s Universal Robots, as well as other exploits of Holmes and Watson. Look closely at the illustrations and you’ll see all sorts of unexpected details — though you may be too engrossed in the story on first reading.”

The Hound of The Baskervilles – A Sherlock Holmes Graphic Novel is available from all good bookstores including   Amazon USA, Amazon UK, Waterstones UK, and for free shipping worldwide Book Depository . 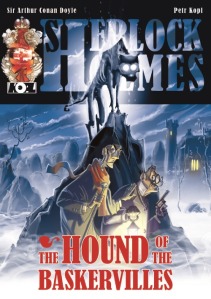 ← Philip K. Jones reviews The Final Page of Baker Street
Review of Sherlock Holmes and the Horror of Frankenstein →