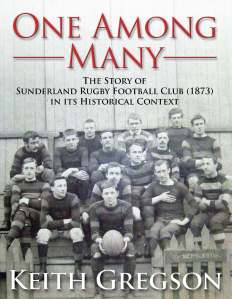 Keith Gregson’s book on Sunderland Rugby Club is making good progress. It’s due for launchon the 10th October in time for the Rugby World Cup and is called ‘One Among Many – The story of Sunderland Rugby Football Club (1873) in its historical context‘

Keith told us this week;

‘This comes on the back of a book I’ve been doing on British sport in general. I am conscious of trying to produce a work that is both interesting and useful to those with an eye to wider sport history. So far so good as the club archives are throwing up fascinating material on the split over professionalism in the late nineteenth century, relations between the club and the RFU and the early development of schools and youth rugby. I hope this may act as a stimulus to other clubs to look at their past and to see if their experiences are similar or different from the Sunderland one.There are also useful lessons to be learned from the past in relation to running a rugby club as should become clear from the finished work’.

Keith’s published works over the years show that he is equally happy working as a popular historian as an academic one and he is trying to find a happy balance in this publication.An interesting challenge. You can contact him through his blog ‘History of Sunderland RFC‘ if you have interesting information for the book.

Following the popularity of the Clifton RFC History – ‘For College Club and Country‘ we are certainly looking forward to our second major club history. Sunderland won the publishing contract through a tough fought competition with Rugby World magazine.

The competition was formed after MX’s first rugby history book ‘Rugby Football in the 19th Century‘ was nominated for Rugby Book Of The Year 2010.

Posted by mxpublishing on March 16, 2011 in Rugby History